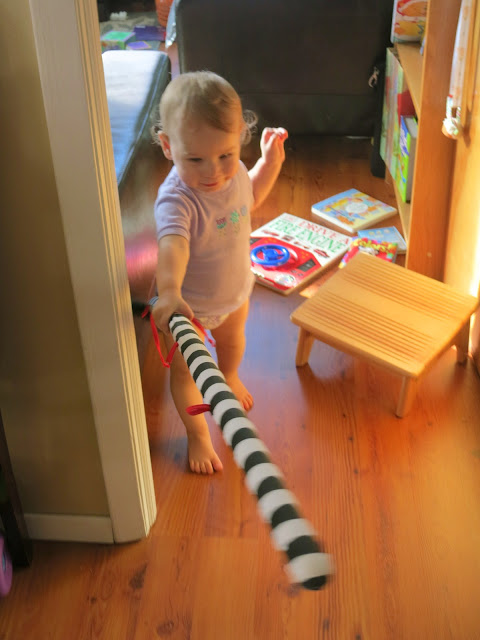 Later I put on pants and had a snack. It was an apple.

Which led to what you and Mama now refer to as "The Apple Debacle." After nibbling on said apple, it was dinnertime so I sat in my highchair and dined as normal. But then you guys realized the apple was MIA. It was fun watching you look everywhere. You checked all my toy baskets, purses, and bags, underneath the fridge, the oven, the couch, and the bed, behind doors, bookcases, and boxes. I can't even open the oven but you checked in there at least twice. I mean you really tore the place apart for close to an hour while I sat and enjoyed my dinner. I could see the panic and perplexity rising the whole time. What if you couldn't find the apple? Had I eaten the entire thing, seeds, stem, and all?? It was amusing.

Anyway, as soon as I was done eating and got out of my highchair, Mama asked me where the apple was. It was about time you thought to just ask me. So I walked over the the side of the couch and tapped the bottom. Duh. It was right there.

Needless to say, my dessert apple never tasted so sweet.


*Note from Mama: we checked under the couch numerous times, but we looked from the front, not the side. The apple was situated where it was blocked from view from the front, but easily seen from the side. Also, we are nincompoops.