Holy monkey, you guys, I went to the zoo today!! It was the Metro Richmond Zoo, and it was so much fun! I saw so many animals, fed some goats, went on a safari, got kissed by a giraffe (for real!!), and went on a carousel to top it all off. Whee!

Here we are after just arriving at the zoo:
First we saw some of these guys: 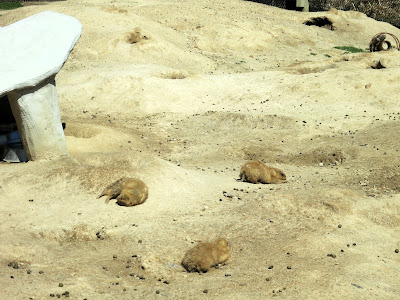 They're prairie dogs. I see a lot of dogs in NYC, but they're nothing like this. Anyway, they were great until I saw this: 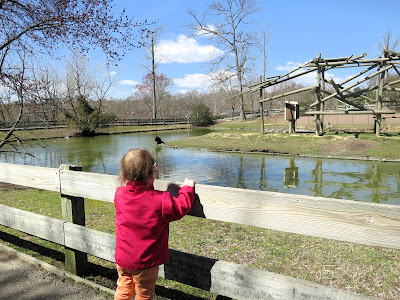 Can you see him? Above and slightly to the right of my head? It's a monkey drinking water! He was the best until I saw this: 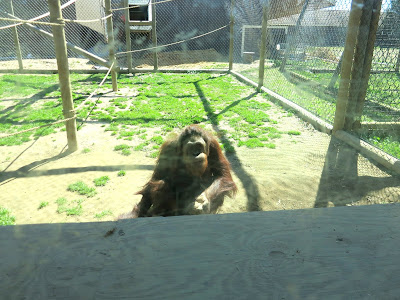 It's an orangutan! Just hanging out there. Looking at us looking at her. Now she was tops until I saw this: 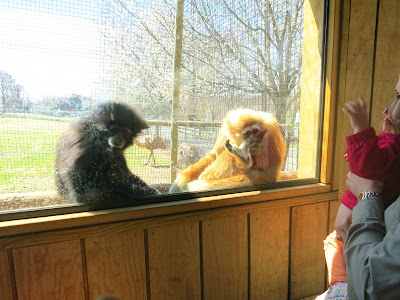 Do you see these guys? They are truly awesome. See how I'm waving at them and the reddish brown one is waving back at me? He's waving with his foot! With his foot, I say!! Who does that?

The zoo totally had me at the prairie dogs, then they threw in a medley of monkeys, and then... 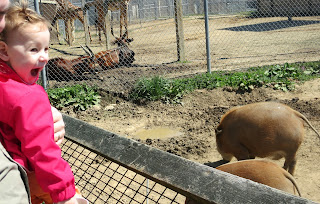 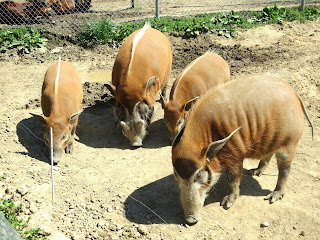 Boom! Wild boars. I loved them instantly. Moving on, there were these: 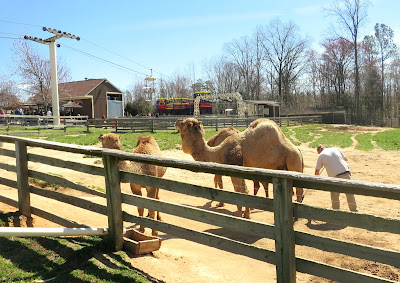 Camels! But not just those camels, there were these, too: 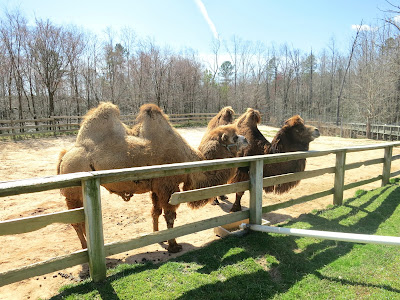 That's right, they had one-humped and two-humped camels.* This zoo meant business. It was on!!

Next, we were off to the safari. But first, the obligatory goat feeding shot:
Here's Mama and I on the safari:
I don't know what Mama was looking at on her side, but whatever I was looking at was way cooler.

After the safari ride, I was a little sleepy so we pretty much ran past the lions, rhinos, cheetahs, et. al. I don't remember exactly what else because I was half passed out. Then we came upon the giraffes. Now this zoo has one of the most amazing things ever -- it allows you to get up close to a herd of giraffes and feed them treats! It was so exciting to get so close to them and feed them! Waaaay cooler than just feeding goats. (Sorry, goats!) And they were so quiet and gentle and pretty. I love giraffes!!


The last photo was moments before I got a giant giraffe-tongue kiss that almost swallowed up my entire head. Have you seen a giraffe's tongue? Take a look: 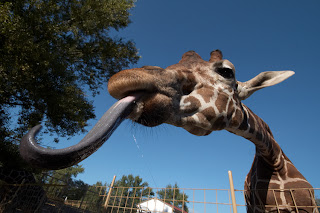 Crazy, right? Anyway, there's no actual photo of the kiss, but it's something I'll cherish forever. Along with the giraffe pox that Mama is fairly certain I have now, too.

It couldn't really have gotten any better, but then there was this:

So overall, one of the best days of my life. Really.

Also, one of the best naps of my life.

*OK, here's some extra credit for you guys: we all know that a one-humped camel is called a Dromedary. Duh. But what is a two-humped camel called? NO CHEATING!! Whoever answers correctly in the comments section wins a mystery prize. Hint on the mystery: there is no prize.

Email ThisBlogThis!Share to TwitterShare to FacebookShare to Pinterest
Labels: zoo